In my last post, I summarised John Field's work on how we process what we hear in a foreign language. The very first step in his schema is decoding sounds, followed by matching these to our prior knowledge of words that contain these sounds or those that approximate to the ones we hear. 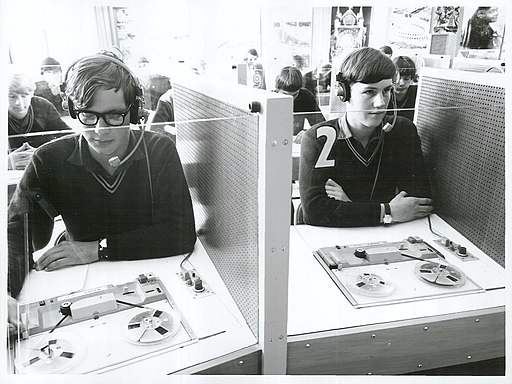 However, we, as teachers, do not usually devote much time to doing this in class. We seem hooked on higher order strategies, like inference. In other words, we offer visual cues (such as photos) that give us clues as to what a listening text might be about. We also often discuss the topic of the script before we play or read it to students, thereby inviting them to bring their prior knowledge of the area into play when they are listening. In short, we ask them to infer (or make intelligent guesses) about the meanings of scripts.

If you think about it, watching movies as listening practice relies on inference too. The visual cues are the facial expressions, activities and tones of voice of the actors. They give us useful information about the meaning of what the stars are saying. Consider Bollywood. Films made in Hindi need to be linguistically simple as audiences in West Bengal, the entire south of India, Bangladesh and Sri Lanka (not to mention fans in the Gulf and elsewhere) do not speak the language, although (because of the movie industry) they may recognise elements of it. As such, the actors make very overt facial expressions and gestures so as to illustrate what they want to put across in words. By rehearsing themes before asking students to listen to text, we are doing much the same thing, albeit on a more sophisticated level.

Despite these efforts, our students often complain that recordings are unclear. It's because they cannot differentiate one word from another that spoken language seems to be so fast as to be unintelligible to them. If they can't tell where one word starts and stops, the script becomes a raging river of sound.

Gianfranco Conti - his blog is an excellent resource not only of theoretical analysis but also practical tips to help us improve our teaching - has offered us some simple classroom activities that focus students' attention on sounds. In other words, he favours a bottom-up approach, starting with Field's phonological decoding phase. Here are a few of his ideas (although he uses French, not English, on his blog as the target language):

The teacher reads or plays a list of words after giving students a written lists of them. They have to identify the silent letter(s), like B in 'comb' or 'GH' in 'although'.

b) listing words in the right order

For those students just starting out, the teacher reads out a list of a few words. Students already have these words but in a different order. They have to number them in the sequence that they hear. You might choose to include a couple of words on students' lists that are not read out.

Another idea of Gianfranco's is to get students to spot the mistake in lists of words that do not entirely match the sounds of the words they hear.

In addition to these, most teachers will be aware of pronunciation work on minimal pairs, like SHIP and SHEEP, THREE and TREE. Clearly here the teacher needs to be conscious of those sounds which cause special difficulty for speakers of their specific L1, whether this is the V sound for Turks, or SH for the Sinhalese or P for Bangladeshis.

Please have a look at Gianfranco's site. There are many more ideas there. You can find it here

Listening texts at slow to normal speeds are available free of charge on Read Listen Learn, you can sign up free here