The Murder of James Maybrick or The Discovery of Jack the Ripper?

Not too long after James Maybrick had married his much younger wife, she was on trial for his murder. What went wrong with the marriage, we will never know, but one explanation might be in the diary he kept hidden, in which he described a series of horrible murders very similar to those committed by Jack the Ripper. Strangely, when Maybrick died, the murders stopped (1,100 words) 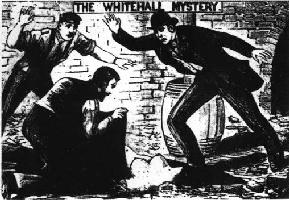