The Passing of Grandison

Chesnutt has never received the fame he deserves as an author. Even in his own lifetime, this brave man who chose to live as an Afro-American although he looked white, was criticised first for his radical beliefs and, when he was old, for being a racist himself. In this comic story, Chesnutt shows how a slave got the better of his young master and an old one too (3,950 words). 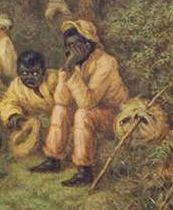